Breast implants: saline to cohesive gel much has changed since implants were introduced  in 1961 to the aesthetic marketplace. Through advancement and modifications, five generations of implants have evolved over a 60 year span.

The initial fill was with saline which served the purpose of increasing the size of the breast or reconstruct it. Saline implants are not pre-filled not as dense as natural breast tissue the final volume could be adjusted. This versatility provided a certain level of precision. When a saline implant develops a leak it will normally deflate in three days. Absorbing the saline is safe as it is sterile and a natural fluid in our tissues.

Attempting to improve breast implants the next frontier was silicone. A safe filler substance this was chosen because it mimicked the density of natural breast tissue. The FDA approved its use twice; in the 1960’s and again in 2006. A moratorium was placed on the use of silicone implants in 1993 for cosmetic purposes. Following a ten year study from 1996-2006 it was determined that silicone implants were safe. Fortunately, this resulted in an improvement in the construct of the outer shell. 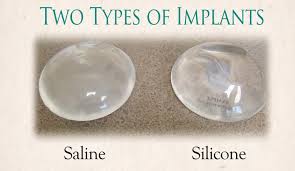 Silicone implants are under-filled to provide a softer touch. 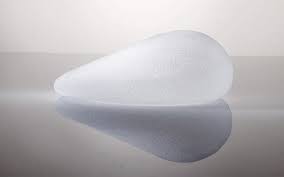 Cohesive gel is often referred to as the “gummie bear” implant. This material is used in anatomical shaped implants also known as  “tear drop”  https://sientra.com/feelgood/gummy-bear-implants.  The photo below shows that a cut cohesive gel implant does not result in spillage of its content.

Texturing evolved to hold implants in position. Consequently a significant reduction in the incidence of capsular contracture was discovered when textured implants were placed in the sub-glandular position.

It’s worthy to remember that test standards by a manufacturer are not recognized nationally or internationally. Important to know that each type of breast implant: Saline to Cohesive Gel has its pros and cons. There is no perfect breast implant. Women considering having an augmentation mammoplasty; its best to discuss the procedure and implant selection that is best for you with a Board Certified Plastic Surgeon. Consultations are complimentary for Cosmetic Surgery, call my office at 989-893-9393 to make an appointment

Every thing went very smoothly and I am very happy with my results as well as the healing process so far!

Dr. K and his staff were wonderful! Before, during and long after the procedure they always answered my questions.

Dr. K made me feel really comfortable and fully explained what implants would fit my body and how the procedure and recovery would be. He asked me several times if I had any questions and was very professional.

Dr Komorowski was personally involved in all phases of my care. His professional, approachable staff only acts to further enhance the quality of my experience.

After my first consult with Dr Komorowski, I felt very comfortable having him do the breast reconstruction surgery. He addressed all my concerns and put my mind at ease through the whole process.

Dr. Komorowski’s skilled hands have given me a lovely outcome. I can continue my life journey knowing that, while I will never be completely ‘normal’ again, his artistry has left me feeling feminine.

Dr Komorowski talked me through the procedures and the do’s and don’ts of recovery and answered every question that I had. He is the most caring and compassionate Doctor that I have ever been to.

I highly recommend him to anyone looking for a GREAT Plastic Surgeon!

Dr. Komorowski's nurse and office staff are wonderful to work with and were so helpful when working with my insurance company for my pre-authorizations. I am so happy with my results and I will most definitely refer Dr. Komorowski. I love my results!!!

This is a great practice. Dr. Komorowski is exceptional in all areas from knowledge, experience and new techniques. He and his staff are professional yet personal and made me feel as though I was the most important patient that day.

The staff was professional, courteous as well as informative. They described the procedures in depth so I felt very comfortable.

Breast implants: saline to cohesive gel much has changed since implants were introduced  in..

The outbreak of carpal tunnel syndrome connected with on-the job work tasks has spurred the..

Tom was brought to Bay Medical Center in Bay, City MI. As with many traumatic..

My sister and I both decided to have procedures done, but for different reasons," says..